Since recently there has been renewed interest in the results of geophysical survey undertaken at Göbekli Tepe in the years 2003, 2006, 2007, and 2012 we put together this short overview on these works and their results – which helped to understand the extension of the Neolithic site and its monuments even in those parts of the tell not yet excavated.

Without a doubt, the most widely known features of the Göbekli Tepe archaeological site are the monumental buildings, which, due to their ‘outstanding universal value’, were recently inscribed on the UNESCO World Heritage List. Notably, since the very early years of excavations, one of the most pressing questions has been whether these structures, with their characteristic T-pillars, were restricted to certain parts of the mound (where revealed through excavation and suggesting a unique agglomeration of this particular building type) or whether they existed all over the tell.

Archaeological survey methods have changed significantly over the last years. One innovation which has dramatically changed the way field archaeologists work are ground-based physical sensing techniques (for a short introduction into this technology and its application see, e.g. here [external link]). This technology provides us with images of possible archaeological features beneath the surface without even taking a shovel to hand. In 2003, a geophysical survey was undertaken at Göbekli Tepe with the help of GGH – Solutions in Geoscience GmbH. In a first step, large parts of the tell were subjected to extensive magnetic prospection, and later selected areas were studied using georadar and geoelectric tomography.

As already noted by Klaus Schmidt in his 2003 field report which was published the same year (Schmidt 2003, 5), first results already provided a better understanding of the site and served to confirm earlier observations:

Subsequent surveys which were undertaken in the years 2006, 2007, and 2012 also confirmed the earlier predictions based on archaeological surface investigations, i.e. that the monumental circular enclosures were not restricted to a specific part of the mound but existed all over the tell (cf. Dietrich et al. 2012, 675). 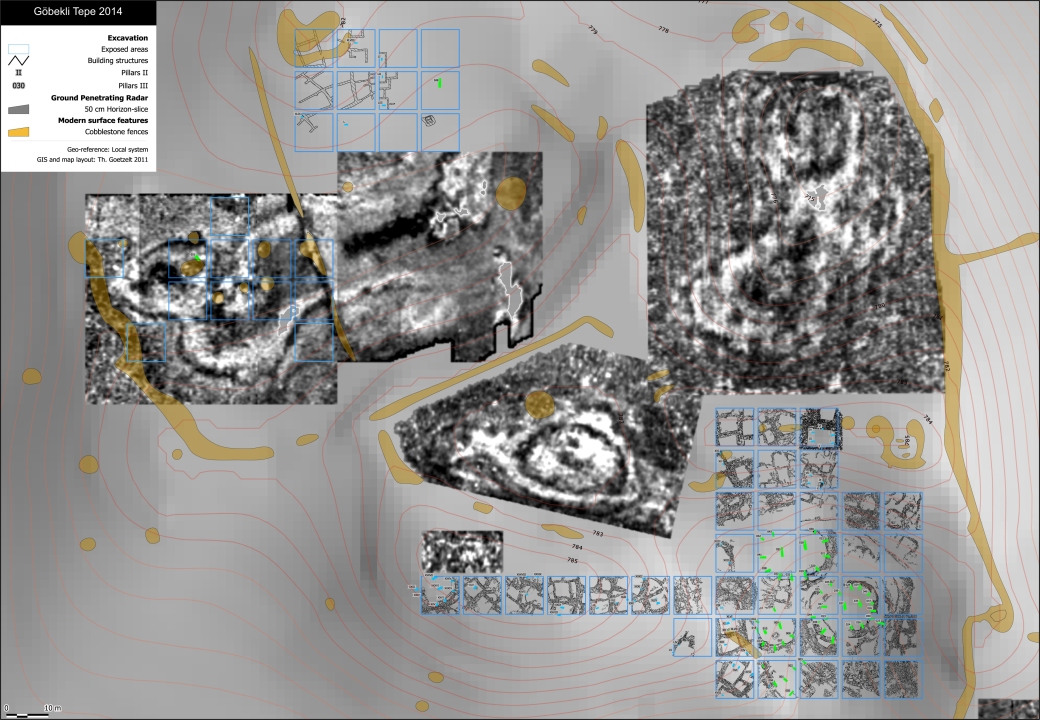 Survey-work also provided a useful tool in the planning of field research strategies, with operations focused in areas of particular interest as indicated by survey results. From 2007, excavations were also conducted in other parts of the site where more monumental structures were suspected, e.g. in the Northwest-Hollow. Here, georadar results showed a large, cloverleaf-shaped accumulation comprising of what appeared to be several circular structures. It is in this part of the site that excavations led to the discovery of Enclosure H. Although fieldwork is still not completed in this part of the site, the current state of excavation already confirms the geophysical-geoelectric results (Dietrich et al. 2016, 56).

15 thoughts on “Looking beneath the surface: Geophysical surveys at Göbekli Tepe”